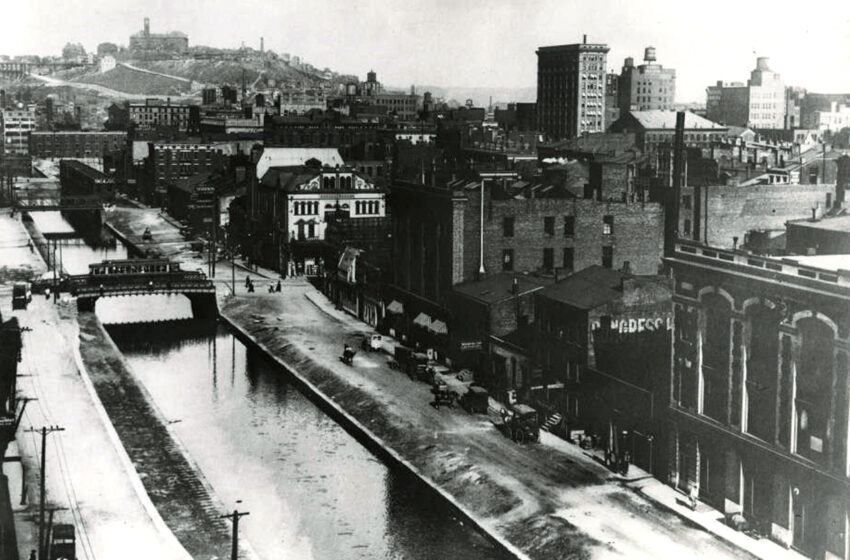 Cincinnati witnessed a 70-plus-year history of colorful cargo and characters along the waterway that gave Over-the-Rhine its name. Greg Hand

Since he was behind almost every improvement ever contemplated in pioneer Cincinnati, it should surprise no one that Daniel Drake proposed a canal system in his 1815 book, A Picture of Cincinnati. Drake was, as usual, 10 years ahead of his time, but his proposal closely matched the route ultimately selected when the canal was laid out in 1825.

The Miami & Erie Canal extended 244 miles from Cincinnati to Toledo. Construction began in 1825 and was completed in 1845, at a total cost of $8,062,680.07. Along the route, the canal crossed 19 aqueducts and employed 106 locks. The last 10 of these locks carried barges from Court Street down to the Ohio River at Cincinnati along a channel now buried under Eggleston Avenue. The peak year for traffic was 1851, after which competition from railroads increased every year. The canal was abandoned in 1913 after a catastrophic flood in Dayton destroyed essential infrastructure.

Along its path, the canal climbed 395 feet upward from Lake Erie to reach its highest level. Known as the Loramie Summit, this plateau extended almost 20 miles between New Bremen to Lockington, north of Piqua. From there, the canal descended 513 feet until it reached the Ohio River. The final 100-foot drop ran from Court Street to the Ohio River in downtown Cincinnati.

From Barges to Superhighways

Long stretches of the Miami & Erie Canal are now traversed by automobiles, especially on I-75, U.S. Route 24, and Ohio Route 25. Automobiles were often the third vehicles to follow these routes. As the canal was abandoned, boats usually gave way at first to interurban rail lines in the 1920s and 1930s. Automobiles followed only after the Federal Aid Highway Act of 1956 funded the construction of interstate highways.

Without the canal, there would be no Over-the-Rhine. Well, not the name. The first references to Cincinnati’s “Little Deutschland” neighborhood as “Over-the-Rhine” appear around the time of the Civil War. Originally a put-down, the city’s German residents came to appreciate the idea that they felt more at home once they crossed over the Canal (the “Rhine”) into familiar territory.

Some of Ohio’s largest lakes were originally created to ensure a consistent flow of water for the canal. Grand Lake St. Marys was one of these feeders and was the world’s largest reservoir when built. Indian Lake, originally a collection of small lakes and wetlands, was converted into a large supply basin for the canal. Along the length of the canal, smaller basins—including LeSourdsville Lake—allowed barges to turn around, dry dock, or exchange cargo.

A couple of local African American churches dunked converts in the Canal. One Northside church performed its rites at a location known then as Baptist Hill. The other congregation baptized a half-mile south of the Bruckmann Brewery, beneath the western slopes of Clifton.

Canal transportation was appropriate if you didn’t need cargo in a hurry and if your cargo was unlikely to spoil. Whiskey, in other words, was nearly the perfect canal cargo, and a lot of liquor went up and down the canal. A single barge could carry 500 barrels of whiskey at 50 gallons each. At pre-Prohibition prices averaging $1 per quart retail, that’s a $100,000 boatload.

A Taste of Venice

The City of Cincinnati celebrated its Centennial in 1888 with an immense exhibition staged at Music Hall, and the 1,248-foot-long “Machinery Hall” was erected behind it over the flowing canal. The hall’s interior was decorated in a Venetian theme, accentuated by a fleet of gondolas poled along by singing gondoliers. The Italian boats returned every year into the early 1900s.

A Lock on a Name

Lockland, our suburban neighbor straddling the “Split” on I-75, has nothing to do with security devices requiring a key. A half-dozen Ohio towns contain “Lock” in their names, all reflecting their erstwhile position along the various canals connecting Lake Erie to the Ohio River. At Lockland, I-75 barrels right through the former canal locks.

As an exposed and relatively shallow stream, the canal regularly froze each winter. In the sections near towns and cities, the annual freeze brought out skaters and even horse-drawn sleighs. The frozen canal also generated substantial supplies of commercial ice to icemen issued permits by the State of Ohio. One of the biggest storage facilities was located at LeSourdsville, north of Hamilton, capable of holding a two-year supply of that pre-refrigeration necessity.

The canal had barely been excavated when Cincinnati City Council passed an ordinance in 1828 outlawing bathing in the waterway. The ordinance began: “Whereas much lewdness and obscenity daily occur from the public and lascivious manner in which men and boys expose themselves in bathing in the Miami canal in the city of Cincinnati…” By the late 1800s, naked men were still in plain view along the local waterways. But nakedness was not the only crime. Even worse, these flagrantly unclothed males were naked on Sundays. Skinny-dippers created an offensive impediment to good folks crossing the Mill Creek bridge on their way to church.

Charles Ludwig’s little book, Playmates of the Towpath, published in 1929 by The Cincinnati Times-Star, is filled with anecdotes about parents paddling their sons (and, rarely, daughters) for swimming in the canal. The book is equally packed with stories about swimmers being rescued or drowning. Although seemingly placid and tame, the canal claimed many lives over the years. Drownings were common, but infectious diseases from dysentery to cerebral meningitis spawned in the polluted waters as well.

Even those former boys who in their dotage fondly remembered swimming in the Miami & Erie Canal recalled the stench from industrial wastes including grease, acids, and chemical salts; rotting animal carcasses; the occasional corpse; and the contents of innumerable chamber pots emptied into the stream from tenements along the banks. When a swimmer yelled “floater,” there was no telling what was on the way, but everyone scrambled out of the water.

Cargo barges had disappeared from the canal by the early 1900s, and long-distance passenger service vanished after the 1913 flood demolished some of the upstream locks. It’s believed the final excursion boat on the Cincinnati section of the canal hosted a party of “Free Setters,” a society of men dedicated to beer drinking. Fittingly, the July 27, 1917, voyage started at the Gerke Brewery on the Plum Street bend and ended at Bruckmann’s near the Ludlow Viaduct.