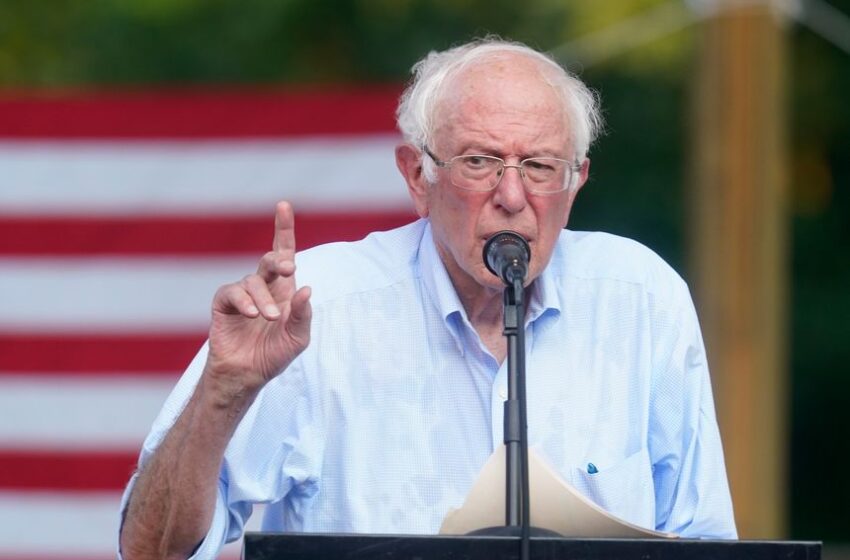 Sen. Bernie Sanders has expressed confidence that congressional Democrats will be able to overcome an aggressive corporate lobbying campaign against their popular $3.5 trillion reconciliation proposal, which special interests are aiming to strip of climate investments, Medicare expansion, taxes on big businesses, and other key progressive priorities.

“These guys don’t lose,” Sanders (I-Vt.), the chair of the Senate Budget Committee, told the Washington Post earlier this summer when asked about the lobbying effort. “They’re going to lose this round.

The Post, which published Sanders’ remarks on Tuesday, offered a detailed look at the “massive lobbying blitz” that corporate America has launched in recent days in a bid to water down—or kill entirely—the reconciliation package, a centerpiece of President Joe Biden’s economic and climate agenda.

One of the organizations that has been “most active” in the effort to prevent passage of the reconciliation bill, according to the Post, is the U.S. Chamber of Commerce, the largest business lobbying organization in the country. Romm reported that the Chamber is “in the early stages of putting together an economywide coalition to coordinate the fight against the still-forming economic package, including its significant price tag, policy scope, and potential for tax increases.”

“The Chamber-organized effort could encompass traditional lobbying on Capitol Hill as well as advertising campaigns targeting Democratic lawmakers,” Romm noted. “The group has been in talks with potential allies such as the National Association of Manufacturers, whose board includes executives from firms such as Dow Inc., Exxon, Caterpillar, and Johnson & Johnson… Other opponents include the Business Roundtable, whose board counts the chief executives from Apple and Walmart.”

As Democrats move further along in the process of translating their newly approved $3.5 trillion budget blueprint into legislative text—a process lawmakers hope to complete by next month—the lobbying push is likely to intensify. The Hill reported Monday that corporate influence-peddlers are growing “increasingly optimistic” that they will succeed in keeping major tax hikes, Medicare expansion, and other critical measures out of the final package.

“The business community has made progress with certain Democrats on legitimate policy concerns with some of these proposals and their implications on the economy and international competitiveness,” an unnamed lobbyist with ties to Senate Democrats told The Hill. “A lot of those arguments are landing.”

While The Hill does not name the “certain Democrats” who have been receptive to lobbyists’ arguments, the outlet noted that “business interests have Democratic allies in Sens. Joe Manchin (W.Va.) and Kyrsten Sinema (Ariz.) and the group of House moderates led by Rep. Josh Gottheimer (N.J.)”—all of whom have voiced opposition to the $3.5 trillion price tag.

But Sanders—who has characterized the reconciliation bill as potentially the most consequential legislation since the New Deal—said in an interview last week that $3.5 trillion is “the minimum of what we should be spending.”

“I already negotiated,” said Sanders, who previously pushed for a reconciliation package as large as $6 trillion. “The truth is we need more.”

The Senate Democratic caucus can’t afford to lose a single vote if it hopes to pass the reconciliation bill, which is exempt from the chamber’s 60-vote filibuster rule. House Democrats have just three votes to spare.

Sanders was the chief architect of the $3.5 trillion spending blueprint that the Senate Democratic leadership ultimately agreed to last month, and he was instrumental in winning the inclusion of proposals to lower the Medicare eligibility age and expand the program to cover hearing, dental, and vision—ideas that prompted intense backlash from the powerful for-profit healthcare industry.

“The reforms threaten the bottom line of insurers who administer private Medicare plans and sell supplemental coverage for dental, vision, and hearing services,” Politico reported last week. “Groups like the American Dental Association, worried their members will be paid less in traditional Medicare than in private Medicare plans, are also pushing to limit the new benefits to the poorest Americans.”

In a tweet last week, Sanders made clear that he is unfazed by the industry’s protests.

“I’ve got a message for the healthcare industry: Your days of writing legislation are over,” the Vermont senator wrote. “We will expand Medicare to provide dental, vision, and hearing coverage to benefit seniors, not to pad the profits of healthcare industry CEOs. And we will do it by taking on your greed.”

You can read the original story on Alternet.