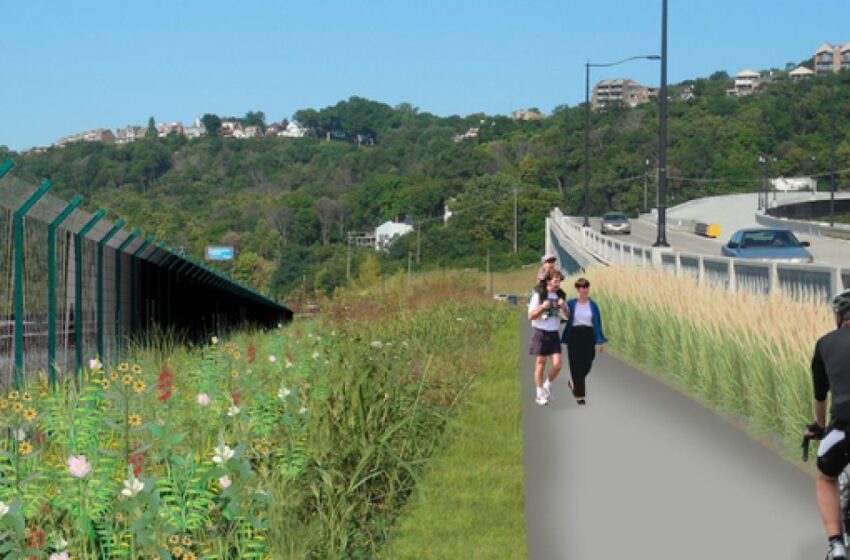 West Siders have a new place to ride their bikes along the Ohio River.

It’s part of the Ohio River Trail West. The new section is short, a 0.6 mile stretch that runs along the river from Evans Street to State Avenue.

Eventually, it will be part of a three-and-a-half-mile path that goes east to Riverside Park.

And further down the line, it will all be part of a 26-mile path to Shawnee Lookout Park on the Indiana border.

That’s the long-term, 10- to 20-year vision, said Tri-State Trails Director Wade Johnston, but getting the first 0.6-mile portion done is “kind of putting a stake in the ground and saying, ‘OK, we’re doing this.’”

The city has allocated funding for two of the three segments of the three-and-a-half-mile project as well as a small section at the end that is already complete. The cost for those first two segments is about $2.4 million, with about $1.8 million coming from grants.

The second segment will be completed in 2021.

The third segment is not yet funded.

The new trail comes at a time when there is renewed interest in biking in Cincinnati and across the nation, one of the side effects of the coronavirus pandemic.

An Enquirer report earlier this month, however, revealed that the city is far behind its own goals regarding bike infrastructure. By now, according to the city’s plans, Cincinnati should have about 170 miles of on-street bike infrastructure such as bike lanes. In reality, only about 30 miles actually exist.

For off-street infrastructure, such as bike paths and trails, the city’s goal was to have close to 50 miles by now, compared to just over 33 miles that actually exist.

The Ohio River West Trail is a step toward those goals and toward bringing some focus to bicycling on the West Side, Johnston said. The East Side of Cincinnati has a lot of trail projects, but the West Side has historically been left out, he said.

“We want to bring that same opportunity over to the West Side,” he said.

The trail is open already, though the city is hosting a ribbon-cutting ceremony at 10 a.m. Saturday near the intersection of River Road and State Street. For more information, visit the Ohio River Trail West Facebook page.

Read the original story at cincinnati.com.