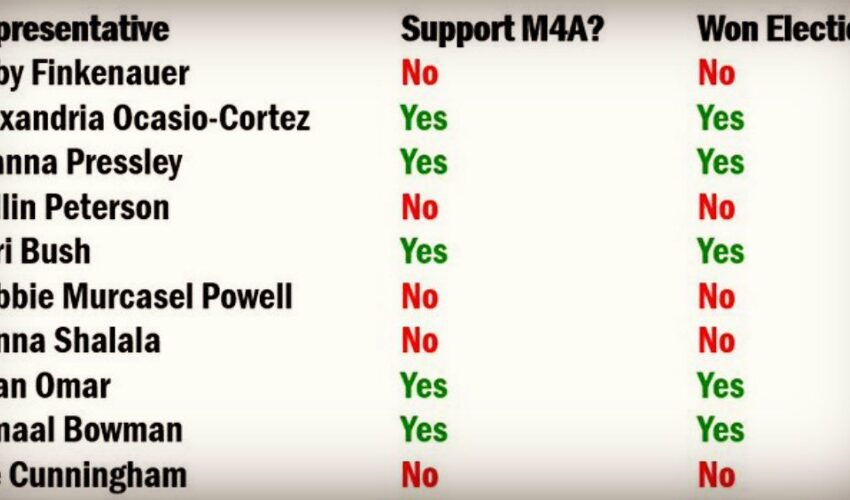 The same cannot be said for those more centrist lawmakers who continue to defend the nation’s increasingly unpopular for-profit healthcare system.

Highlighting an interesting—and to many, instructive—electoral trend that others have spotted in the days since 2020 voting ended earlier this week, Congresswoman Alexandria Ocasio-Cortez on Saturday—just as jubilation spread nationwide among Democrats and progressives upon news that Joe Biden will be the next U.S. President—pointed out that every single congressional member this year who ran for reelection while supporting Medicare for All won (or was on their way to winning) their respective race.

The tweet emerged as many across the corporate media landscape, including pundits and former high-level Democratic officials like Rahm Emanuel, unabashedly pushed a narrative that progressives calling for policies like a single-payer universal healthcare system or the Green New Deal are somehow a hindrance to electoral success. Ocasio-Cortez was not standing for it:

As Common Dreams reported Friday, while corporate-friendly Democrats have continued to go to bat for the for-profit healthcare system that lavishes billions of dollars each year on insurance companies, for-profit hospitals, and pharmaceutical giants, a new poll this week—put out by Fox News no less—shows that 72% of all U.S. voters would prefer a “government-run healthcare plan.” And the poll is far from an outlier, with numerous surveys in recent years showing this trend.

“Polls consistently show a majority of the U.S. electorate [is] considerably to the left of both party leaderships… on issue after issue—the environment, electoral reform, [and] Medicare for All,” said Jacobin’s Luke Savage in response that poll.

Despite what “corporate front groups and lazy pundits always say,” tweeted journalist Andrew Perez, “people absolutely do not like their private health insurance.”

When it comes to the 2020 election—even though Biden himself ran against Medicare for All—the following illustration, which includes Democratic incumbents and challengers, made the connection very clear when it came to races in the U.S. House of Representatives this cycle:

As astute political observers have been pointing out for years, the United States electorate remains very supportive of universal programs and other progressive policy ideas that their elected representatives—both Democrats and Republicans—have refused to embrace.

With an increasing focus on the need for  radical and far-reaching changes to the world’s economic and energy systems in order to address the existential crisis of the climate emergency, voters across the political spectrum have showed—in poll after poll after poll—their support for such action to be taken.

And as Ocasio-Cortez added to her tweet about Medicare for All on Saturday: “We’re running numbers on [the Green New Deal]” next.

Tags: AOC congress Medicare for All