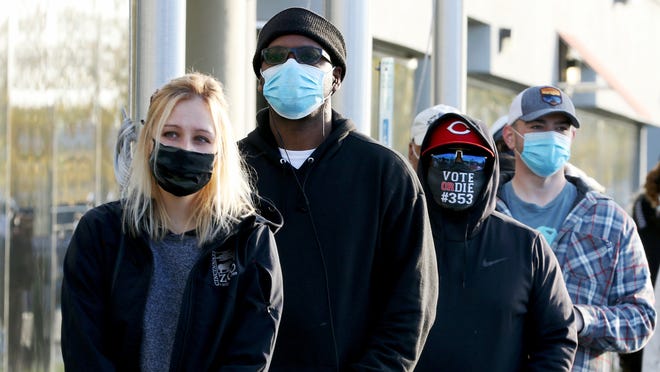 Masked and socially distanced, Ohioans kicked off the first day of early voting.

Some camped out with chairs and blankets before election officials opened their doors, starting nearly a month of voting before Election Day on Nov. 3.

“This feels like Christmas morning,” said Hamilton County Clerk of Court Aftab Pureval, a Democrat. “This is our chance to defeat Donald Trump.”

Tuesday marks the first day most Ohioans can cast their ballots for president, Statehouse and county candidates. Ohioans living overseas and in the military have been able to vote since Sept. 18.

In line at the Clermont County Board of Elections, Sarah Fenno, 23, said she didn’t mind the wait.

“I get it, whatever you have to do to be safe,” she said.

No Republican has won the White House without winning Ohio. The last Democrat to become president without Ohio’s support was John F. Kennedy in 1960.

Candice Matthews-Brackeen, 43, of Clifton, was the first in line in Hamilton County, dressed in a full-length jacket, hat and mask. She is voting for Biden and his running mate Kamala Harris.

“We have a person in the administration that is not the president of all Americans so I’m here to make sure we have a president of the United States and not just for some,” said Matthews-Brackeen, adding that the president has not been considering Black families like hers in his decisions.

Hamilton County Republicans are planning to march to the polls Tuesday afternoon.

This presidential election could be won in the suburbs. Early Tuesday, nearly 100 voters were lined up at the Warren County Board of Elections. Butler and Clermont counties also boasted long lines of eager voters.

Some voters who typically vote on Election Day were showing up early – just in case. Deborah Davis, 67, of the West End, said she was worried about waiting until Nov. 3 to vote because of the pandemic.

“I’m here to make sure my vote counts. You’re not sure what’s going to happen,” Davis said.

Hand sanitizer and standing on squares

The enthusiasm and commitment of dedicated voters is nothing new to Ohio, a perennial swing state and frequent presidential bellwether. But voting will look different this year. More Ohioans are expected to vote by mail. And those who vote in person will see more social distance and hand sanitizer.

Franklin County Board of Elections has 150 voting machines spread out over 30,000 square feet. Each voter will use a metal stylus to sign the electronic poll book and make selections on the voting machines. After residents vote, the styluses will be sanitized.

Tiesha Brown, an election support staff member with the Hamilton County Board of Elections, greeted voters in a face mask and shield, advising them to be aware of the social distancing squares on the floor to keep everyone six feet apart.

Voters who didn’t have a mask were offered one and few, if any, refused. Voters without a mask will be asked to vote curbside.

“But all in all, when it comes down to it, if they won’t go curbside, we can’t tell them they can’t vote,” Butler County Board of Elections director Diane Noonan said.

Rick Smith, a precinct executive for the Warren County Board of Elections, kept it festive by offering masks while dressed in an Uncle Sam costume.

Voters in Clermont County abided by the request to wear a face covering but were less diligent about keeping adequate distance between one another, said Julia Carney, director of the Clermont County Board of Elections.

“Some are compliant and some would rather not,” Carney said. “We’re doing our best there to remind people.”

Tracy Murchison, 59, of Springboro, who voted at the Warren County Board of Elections, said she felt safe coming to the polls because of the precautions in place.

“I just wanted to make sure that I got it done and make sure my vote was counted,” she said.

Concerns about the spread of novel coronavirus could lead to more voting by mail this year. Absentee ballots are in the mail to more than 2 million Ohioans who requested them.

Those who want to request a ballot via mail can fill out an application and deliver it to their county board of elections. Applications can be found at the Ohio secretary of state’s website: voteohio.gov.Get the Inside Ohio Politics newsletter in your inbox.

Here’s what you need to know:

Where can I vote?

Hamilton County Board of Elections

Butler County Board of Elections

Clermont County Board of Elections

Warren County Board of Elections

Live in another county? You can find your county board of elections at voteohio.gov.

What are the hours for early voting?

How do I track my Ohio absentee ballot?

Each board of elections offers ways to track your absentee ballot. Check the sites below:

When do Indiana and Kentucky start voting?

Early voting begins today in Indiana and Oct. 13 in Kentucky.

Who is on the ballot?

In addition to president, Ohioans will vote on a slew of local races. Check out The Enquirer’s voting guide here. (Editor’s Note: I’d stick with the Dems)

Have other questions about voting in Ohio? Email me at jbalmert@enquirer.com or check out The Enquirer’s guide to voting here. You can also text us voting questions via a partnership with ProPublica called Electionland. Find out more here.

Read the original article at cincinnati.com