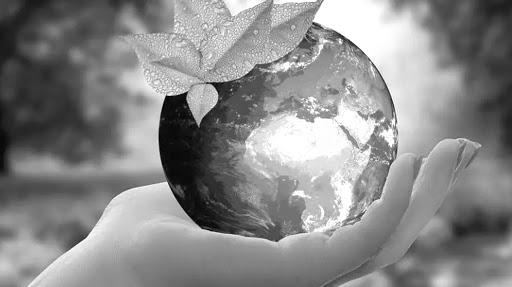 I recently read an article about the Pigmies in Central Africa. For thousands of years they took great care of the forests they lived in. They listened to the forest and were able to improve the conditions of it, and receive the sustenance they needed to live. They believed the forests were an extension of themselves.  This belief is similar to other indigenous peoples.

Some 10,000 years ago when agricultural societies were developed this connection with the Earth was severed. Humans began to believe that they could own other animals as well as plants. It made it easier for our species to domesticate and kill animals and plants and use the soils and waters however they wanted to when they held the others as object, as something separate from themselves. They developed a belief that nature was “other” and existed for humans’ use and exploitation. This objectifying of the non-human part of the Earth deepened as we began industrialization and large- scale farming, moved into cities, and paved over the land. Everything was here for humans to manipulate and use however they wanted. Since it was here for humans, humans could own everything.

Severing recognition of our interconnection with the fellow Earth community extended as well to other humans. Humans, as do many species, have a genetic orientation to support “our own.” It was easy, therefore, to also see other humans as “other”, and often not as good as one’s own group. In this vein groups began objectifying other groups of people and developed a belief that other humans were not really human so killing or enslaving them was of no real concern. This belief has been followed for thousands of years. The notion that all humans are equal is a very new phenomenon. On paper, slavery is no longer politically accepted in any country. Just because slavery isn’t accepted in this way, it still exists on many levels. Even where slavery isn’t accepted it doesn’t mean that people don’t see other people as less than. In our country there are many who believe white people are superior to any other people. There are those who claim to be White Supremacists. There are others who believe it but would never say so.

This separation and belief is directly connected back to the believe that the Earth is here for the human species, that it is the superior species and leads to the belief that “my group is better than your group.”

We are dealing right now with a flashpoint of concern regarding the Coronavirus and racism toward people of darker skin. Both of these go back to our disconnection from the rest of the Earth community. The virus comes from our invading wilderness areas that other species are dependent. Racism comes from our need to feel superior to other humans.

It was likely advantageous10,000 years ago to intellectually disconnect ourselves from the rest of the Earth Community.  Even though it led to countless acts of cruelty both to other humans and the Earth, there are now more than 7 billion members of our species living on the planet. The increase in numbers of a species is usually a sign of the species success.

We have now reached a point where it is no longer advantageous to our species to see others, within the Earth Community or other human groups as objects, as lesser than ourselves, as things that we can own. The belief that we can own all other beings, rivers, mountains and land and the belief that “my group is superior to your group” is leading us to a future of hardship and possibly extinction of our species.

By the estimates of the Global Footprint Network, humans currently consume at a rate 1.7 times what Earth’s regenerative systems can sustain. As a consequence, we are destroying the health of the living systems that provide the food we eat, the water we drink, the air we breathe, and the stability of the climate that shapes the daily life of every living being.

While the future will have a negative effect on our species from what we have already done, a future of excruciating hardship or extinction aren’t necessarily inevitable. We can turn it around by simply changing the way we think – which really isn’t that simple.

We need to see ourselves as one of 10 million species on this planet, sharing it together. We are not superior. We can’t own the other species or any part of the planet.

Money comes in a close second. It doesn’t really exist, so it isn’t going to bring us happiness.  Money needs to return to its former purpose as purely a means of exchange if and when we use money at all.

We are at a place where corporations and money are now held as superior to all of us. Whatever serves them is culturally believed to be good for us.

As long as fracking “makes money”, it is okay that some people get sick or die in the extraction of it. We can’t respond to climate change in a way that will lessen human suffering because it would interfere with corporate profits. Communities can’t stop harmful practices that corporations force upon them because it would decrease their profits. They need pipelines, deforestation, extractions of coal and metals from the Earth in order to increase their profits. Their profit is more important than the community of people they are negatively affecting.

While we need to spend time trying to stop the harm that is going on around us, in the long run it will be by changing the way we think that will save us.

What would a different way of thinking look like that would bring about a future for our species? Some ideas:

Having an ecovillage or some type of community of people supporting us to “enhance the Earth” is very helpful. It makes it much easier to live sustainably when the people around us have the same values. We encourage people to gather a supportive group around them. Setting up an urban ecovillage is one way to do it.

However, for us and for the nation we need a total cultural change. To this end I have come across one movement that seems to incorporate many of the ways of thinking that can save us. It is the Rights of Nature, the Rights of Community movement. Their ideas seem to be right on, and they have shown to “have legs” as they have begun to bring about a change in thinking locally and globally.

The movement talks about how our culture has given corporations rights but does not recognize the rights of living, breathing beings on the planet, or the rights of the waters and land.

The organization, the Community Environmental Legal Defense Fund (CELDF) believes that it is essential to curb the rights of corporations and to recognize the rights of others who share this planet and giveing them the ability to stop the harm being done to them.

The Countries of Bolivia and Ecuador have put Earth Rights in their Constitutions. New Zealand has legalized personhood status for a mountain, river, and national park.

There is even a movement here in Cincinnati, with the support of Community Earth Alliance,  pushing for legal personhood for the Ohio River.

There may be many other approaches to recognize the rights of nature. We have just seen that CELDF and their move toward Rights of Communities and Rights of Nature as being successful and touching on the deep connection we need to make with our fellow Earthlings.

In the end, what is important is that we change the way we think, that we see ourselves as Earthlings, totally dependent and interdependent with the rest of the planet. A future for our species is reliant on it. Humans are stuck in an old way of thinking that is destroying us and the planet. The Rights of Nature, the Rights of Community movement offers a positive hopeful way to reimagine our relationship with the earth and ourselves.

For more information go to: