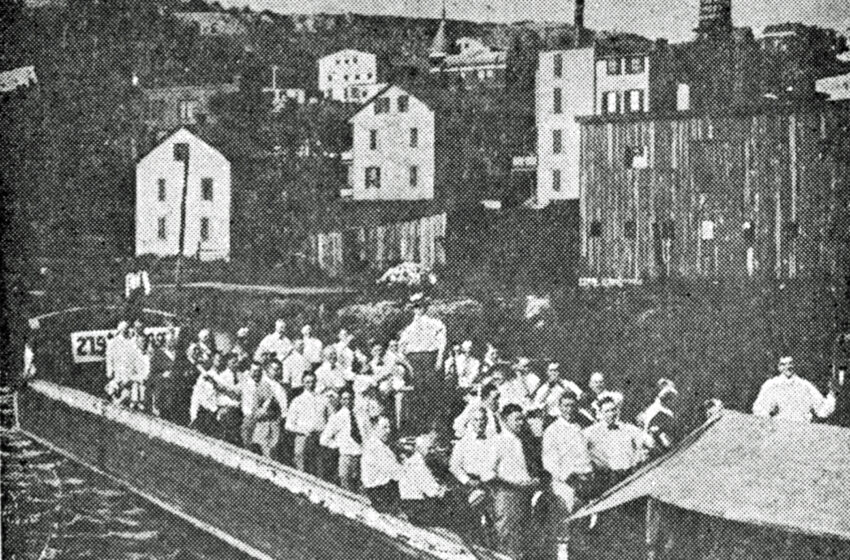 For 50 years the male fellowship club had no rules, fake elections, weird nicknames, a secret password, and one female member. Its annual beefsteak dinners were a sensation.Greg Hand -June 22, 2021

Cincinnati has hosted some unusual organizations over the years—from the Schlaraffia Society to the Night Owl Beneficial Smokers Casino to the Dry Dredgers—but, even among this menagerie, the Free Setters Union stands out. Founded as a Cumminsville social club in 1886, the Free Setters earned a national reputation for bohemian hijinks, delectable dinners, prodigious beer drinking, and a decidedly unconventional interpretation of Robert’s Rules of Order.

But what, precisely, is a Free Setter? Charles Ludwig, in his 1929 book, Playmates of the Towpath, records this explanation:

“The late C.L. Doran launched the Free Setters in 1886, the name being a play on the men of that time who would sit around saloons waiting for the beer collector to make his weekly call and treat,” said Edward Steinborn, city editor of The Times-Star, known as “Commonwealth” in the Free Setters—for every member has a nickname. “Licorice Doran was president of the society until his death. One of the first meetings of the order was held at Bruckmann’s Brewery. Each member had a favorite song, and the custom was established of singing this song on the death of the member.”

Charles L. Doran (a.k.a. “Licorice”) worked at just about every newspaper in Cincinnati, including a couple he founded on his own. The Free Setters Union comprised journalists and brewers for much of its first decade, but eventually accommodated a diverse cross-section of the city—from business executives and city officials to theatrical stars and sports figures.

Membership was at first limited to 25, then expanded to 50. The restricted number implied that deaths or resignations were the only pathways to a vacancy, so the Free Setters would frequently “promote” a member to honorary status if he moved out of town, missed a couple of meetings, became too famous, or for any real or imagined violations of club rules.

Such violations were almost exclusively imaginary, because the Free Setters actually had no rules other than arbitrary pronouncements by Doran, who was continually re-elected as president for the first 40 years despite annual campaigns by two competing candidates. No matter who won the “election,” Doran always disqualified the other votes for some capricious reason and continued his reign as chief executive.

The Free Setters had no dues and no scheduled meetings, but they somehow organized an annual dinner that became one of the hottest tickets in town, attracting not only the entire membership but 150–200 guests and honorary members as well. The menu never changed, consisting of T-bone steak, potatoes cooked in a boiling tub of pitch, and an unlimited supply of bratwurst. Every so often, someone—or everyone—shouted the secret password “Front!” requiring all who heard it to quaff a beer. Free Setter venues were consequently known as “Frontsville.”

Each year, the club projected images of deceased members on a screen and sang the departed’s favorite song. Until 1907, the images were still photos, but that year the club hired a film company to record every member so that, when the time came, a moving picture of the late member could play while serenaded by his chums.

So much singing accompanied Free Setter assemblies that some members went professional and formed the Free Setter Quartet, which earned top billing on the day’s vaudeville stages. The quartet’s lead tenor, Edward Drury, went on to a long and successful solo career.

Another show business luminary to emerge from the Free Setters was Charley Grapewin, a vaudeville comedian who made the leap to film, logging more than 100 motion picture roles, including Uncle Henry in The Wizard of Oz.

Although the wives of the Free Setters formed an auxiliary in 1897, mostly to qualify for a bowling league, only one woman ever achieved full membership in the club: contralto Emma Carus. In 1901, most of the membership attended her performance at Heuck’s Opera House and went backstage to express their appreciation. On learning that the Free Setters were on their way to Northside to serenade an indisposed member, Carus joined them and provided a sidewalk concert that earned her full membership and the nickname “Wabash.”

In 1917, the club’s annual dinner included a historic jaunt as the final passenger vessel to navigate the Miami & Erie Canal before it was drained to become Central Parkway. Charles Ludwig recalls:

“With one brewery (Gerke’s) as the point of departure and another (Bruckmann’s) as the destination, the canal boat jaunt of the Free Setters, July 27, 1917, probably the last outing ever held on the stream, was a memorable expedition to mark the passing of the canal.”

An organization so devoted to beer drinking was hit hard by Prohibition, and club members declared their 1919 dinner to be the final gathering before the dry desert of soft drink overtook them. Eternal President Charles Doran told The Cincinnati Enquirer [December 27, 1918]:

“I fear this will be the last great reunion of the Free Setters. You see the union was founded on good fellowship, and with the disappearance of liquid cheer from Ohio the ‘Free Setters’ may collapse.”

The club soldiered on, in fact, making headlines in 1922 when it hosted Babe Ruth at that year’s beefsteak.

Doran died in 1928, and the club went on hiatus for a few years until a reunion was organized by Charles E. “Slatebreaker” Miller, who was elected as the club’s second president. By 1936, when Miller presided over a 50th anniversary event on the Schoenling Brewery’s roof, not a single charter member remained alive. After that celebratory event, the only mentions of the Free Setters Union appeared in the obituaries of members as they departed—unsung—into the next world.

Read the original article at cincinnatimagazine.com