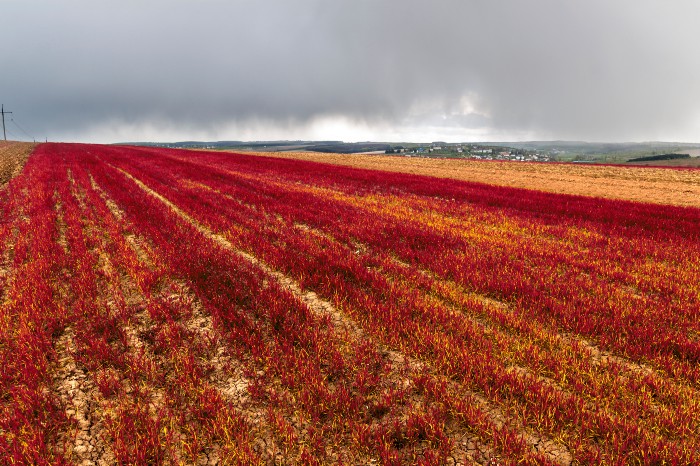 It was once outlawed.

For thousands of years, the first Americans cultivated a blood red plant that supported their entire civilization. They grew it along with corn, beans, and squash for most of their food.

The Aztecs used it in human sacrifice rituals, mixing it with blood to make small, edible statues of the sun god Huitzilopotchli.

They ate them as candy.

Then the Europeans arrived.

So did the Catholic Church.

In 1519 Hernán Cortés led a group of 450 soldiers through Mexico, looking for gold. Instead he found an advanced civilization, and decided to destroy it. The conquistadors annihilated their infrastructure, but they also waged war on their entire culture. Not only did Cortés ban religious sacrifice, he outlawed amaranth itself. They burned entire fields. Farmers who planted it would have their hands chopped off.

The conquistadors almost wiped amaranth off the face of the earth, all in the name of their own deity.

As you can imagine, the war on amaranth wasn’t just about eradicating paganism or human sacrifice. Cortés singled out the plant for its practical and symbolic value. Between killing off a key source of food, and introducing diseases like smallpox, European colonizers were able able to impose their will on an entire continent.

Amaranth could save us all.

We’re going to need it.

In case you haven’t read the news, the world is staring down a food crisis. That’s putting things mildly. We’ve become reliant on a handful of crops that don’t do very well in heat and drought. Extreme weather and war have put everyone on hunger watch. Hundreds of millions of people are facing starvation, and the damage is already happening.

We use wheat, corn, and soy for almost everything. We use it for animal feed. We use it in almost all of our processed foods. Without these crops, we’re pretty screwed. It’s our fault.

Amaranth is arguably the most nutritious plant on earth. It provides every amino acid the human body needs, and it’s higher in iron and fiber than wheat. It also contains tons of magnesium, manganese, phosphorous, as well as the vitamins A, C, E, K, B5, B6, folate, niacin, and riboflavin. On top of all that, it’s gluten-free. It’s also high in protein.

You can grow amaranth in hotter climates.

It can withstand triple digit heat.

You can make almost anything with amaranth. You can grind the seeds up for flour. You can put the leaves in salad. Just like wheat, you can store amaranth for long periods of time. In airtight containers without oxygen, it can last decades. The best thing about amaranth is that it grows fast. You can raise a crop of amaranth in about 50–100 days, less than two months. Compare that to spring wheat, which takes almost three times as long. It takes winter wheat up to 240 days, five times as long.

So basically, the most nutritious plant on earth grows in record time, and it doesn’t need much water.

It takes care of itself.

Amaranth is making a comeback.

Centuries after the conquistadors, farmers in Central America have rediscovered amaranth and started planting it.

It saved them from drought.

Nonprofits are raising public awareness about amaranth, and teaching impoverished communities to grow it at home. They’re showing people how to use it as a substitute for wheat and corn.

Amaranth has a long way to go before becoming popular, but as global warming devastates our other crops, people will depend on it.

Amaranth is just one of several crops that do fine in extreme heat and drought. They might taste different. It might be a hard sell at first, but we won’t have a choice for much longer.

Global warming has arrived. We’ve got to snap out of it.

We should be growing amaranth everywhere.

Between global warming and war, we’re in serious trouble.

Food security translates into national and global security. You can imagine what happens when entire populations run out of food, and it’s starting to happen right now.

We need everyone to be growing food.

We should be growing amaranth everywhere from our back yards to our rooftops and balconies. We should be paying farmers to grow it by the ton, and store it so it lasts for decades.

It could feed the world.

Amaranth is a metaphor for the times.

The story of amaranth reveals a lot about western attitudes. Pop culture has portrayed the Aztecs as a primitive, bloodthirsty civilization who practiced barbaric rituals. Turns out, they were one of the most advanced and sustainable cultures that ever existed. You could even say their human sacrifices pale in comparison to ours.

European colonizers almost wiped out the most perfect food the planet could give us, all in the same of progress.

It’s a good thing they didn’t.